Exclusive! David Doak on the journey from Golden Eye to TimeSplitters 2

And how Golden Eye was almost a SNES platformer. 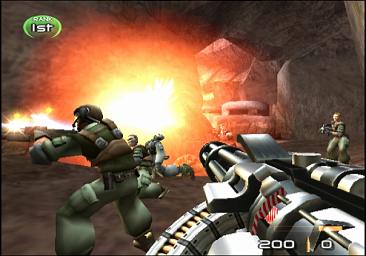 Timesplitters 2
All Images (2) »
We were lucky enough to catch up with David Doak and Steve Ellis, the team behind Golden Eye, the early part of Perfect Dark and TimeSplitters. TimeSplitters 2 is currently in development and is set to become the greatest console FPS of all time, appearing as it will on GameCube, PlayStation 2 and Xbox. Now Managing Director of Free Radical Design, we caught up with Doak, and Ellis, the technical director for TS2.

For reference, David Doak was Dr Doak in the Facility level of Golden Eye. As we had shot him in the head a thousand times, we thought it only fair to give him the chance to get us back.

Question: Please can you explain the evolution of the console FPS within your team, from Golden Eye to Time Splitters 2?

Doak: As we set up Free Radical from scratch, the biggest challenge was starting everything afresh all over again. We were working with prototype PlayStation 2 development kits and had to make good on our commitments. Steve particularly relished this.

Ellis: The early PS2 was a lot of fun to work with. A lot of people have had a lot of problems with it, but for us, it was just like going back to the old Amiga days. It comes down to the hardware tricks you can do with it and there’s not a lot of people doing that these days. It’s a good, fun thing to do. I come from an assembly language background working with the Spectrum and Amiga so the PlayStation 2 is a really good console for us.

Doak: The important thing for us when doing the first TS game was as a start up, we didn’t want to get caught up in a four year development cycle. As the hardware launch date slipped and slipped, we realised that we could release the game on time. The focus of the first game was to create a really good multiplayer game. The single player mode was simply a series of challenges, but I believe that it stands as a very good game. But as soon as we finished it, we had loads and loads of ideas on how we could improve it, so that’s what we did and so started working on the sequel. The performance of TimeSplitters 2 is double that of the first game.

Q: The control method seen within Golden Eye was a delight, in as much as it took a spongy feel that eradicated the need for absolute precision in movement and, as such, was revolutionary. FPS controls for consoles still stop abruptly when turning, making precise control both essential and nigh on impossible. Your thoughts?

D: That was one of the things in Golden Eye, that when you went to turn, you lead with the gun and the viewpoint followed. Otherwise, you feel like you have blinkers on your head and the world moves jerkily and unrealistically. Also, in a first person game, the field of view you have is much less than in the real world, so anything you can do to improve this is essential. This evolution is reflected throughout TS2, it’s a total gameplay rework. There is a narrative, the levels are longer and with cut-scene intros… we have included stealth this time!

Question: Going back to Golden Eye for just a second, how do you think it stands amongst all-time gaming achievements?

Doak: Golden Eye is a strange phenomenon. Apart from myself and one other, no one in the team of eight had ever made a game before and what made the game really great was the pent-up 20 year ambition busting out of everyone to make a game. We saw no barriers to what we could and in that, it was a hugely ambitious project.

Ellis: There were a lot of things that we didn’t get in too. Whenever you make a game, you have a whole wish list of things you want to include and you end up coming to the point where you have to stop putting new things in and get the thing finished and released. There are always lots of things missed out.

Q: Why, what was missing from Golden Eye?

Doak: There were extra things that should have been included within the narrative for instance, like tying things back from later levels to earlier ones.

Q: You had free reign on that narrative?

Doak: Yeah, I mean it’s interesting as it dates from the time when no one thought the Bond licence was worth zip in games. I think the original proposal at Rare was to do some kind of platform game loosely based on the movie. Then the idea was shifted towards doing a Virtua Cop-style game on rails. When we got the engine up and running with that, we decided to go first-person and that’s how it evolved. Steve (Ellis) virtually bolted the multiplayer aspect onto the game within the last few months!

Q: Have you ever had a dream set in any levels within Golden Eye? We have.

Doak: Ha ha, we had a fair few nightmares. That game had a really long crunch period, and people stayed behind until 2AM for over a year to get it finished. The release date was always being pushed back as it was so ambitious for the platform. Due to Rare’s enlightened time policy, we would leave at 2.00 and have to be back in at 9.00…

Q: How far in is TimeSplitters 2?

Doak: As far as things go, we have all the assets, the animation will be closing soon and then we just spend the remaining time optimising gameplay. We are about to begin testing.

Q: How do you go about testing? Is it done by a team of testers or is it development-led?

Ellis: It’s mostly done by Eidos but we do have our own in-house testing team.

Doak: Testing is a strange point in a game’s life cycle. When we do one game at a time, it’s difficult to justify supporting an entire testing department. The best testing you will ever see was the testing done by Nintendo of America for Golden Eye, it was really, really good. They know the importance of testing games. That’s why the games are so good. Developers should not be just coughing out broken builds that are about 70 or 80 percent complete to a testing department. It should be as perfect as possible, I mean why would you make it broken and then tidy it up? When you are closing a game, those last few months are when you can really polish up the gameplay and make it shine. It’s criminal! You see games that are released, the technology’s great, they look great but no one remembered to include any gameplay. Because it costs so much to make a game these days, 20 people tied up for two years, as soon as the technology is in place, you have a load of people trying to stick it in a box and on the store shelves. With TS2, we had the engine from the start so we could just concentrate on gameplay. It makes a big difference.

Q: As far as publishers go, how do you find Eidos?

Doak: We have come to the point now with Time Splitters 2 where the game is so good, we are important enough to be treated well by them. With TimeSplitters, Eidos had too many plates spinning at once, there wasn’t much money and we blindsided them by creating a game in 18 months. We only had the PlayStation 2 development kit a year before the game was complete.

Q: Do you feel that Time Splitters was overlooked?

Doak: It did well in Europe. European and particularly British gamers understood what we were trying to do. Over in the US we were put up against Quake, Unreal, Red Faction. The Unreal thing was really upsetting because we were continuously judged against the PC version of the game, not the PlayStation 2 version. People would say that Red Faction had a great story. No it didn’t! And you could blow up walls in Red Faction too. These were just doors that you opened by shooting them. It was not some kind of non-linear immersive environment where you could do whatever you wanted. It was completely on rails. There’s nothing wrong with linearity in a game because it can then be tuned to be an involving experience.

Q: What do you think of Electronic Arts’ Bond efforts?

Doak: They are disappointing. When we were making Golden Eye, we became quite obsessed with the whole Bond thing. I mean, we made up this word, ‘Bondian’, and applied it to anything that was truly Bond. I think what happens with EA is that they farm it out, get some guys, stick them in a room and say, “Okay, you lot make a Bond game,” and they make it and no one really cares what it’s like. Particularly the controls. Some of the controls are absolutely dire, to the point whereby some of the default options are completely unworkable and you have to take your thumb away from the main stick to use essential buttons. FPS console controls are something we are highly opinionated about. You should give the player a good set of defaults and enable them to define their own obscure ones if they want. All the current consoles have dual-analogue, which is exactly what you want.