Seen any ghosts at E3? We have? 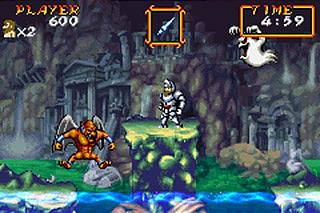 All Images (16) »
Capcom Eurosoft have announced plans to release the SNES classic Super Ghouls ?N Ghosts for the Gameboy Advance. The game, released later in the year, is to be a faithful remake of the original, featuring newly designed stages and enemies.

As expected, the story features the fearless knight Arthur on a quest to rescue Princess Prin Prin from the clutches of the evil emperor whilst battling creatures of the undead throughout the spellbound kingdom. Magic, mystery, treasure and medieval weaponry are ever-present in this classic tale of gallant heroism and ghoulish evil.