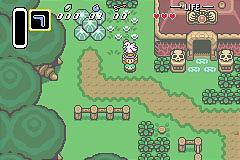 The Legend of Zelda (GBA)
All Images (12) »
The doors to E3 will open to thousands of eager gamers today. Which booth do we expect to be the busiest throughout the show? That’s right - the Nintendo booth.

Yes, all eyes will be on Yamauchi-san’s corporate beast this year. Nintendo has just released information on the dozens of in-house and third-party games that will be on offer, and there are a few surprises. We haven’t played any of them yet, but here’s a glimpse of some of the finest you can expect to see.

We’re sure you will agree that this is a titillating sample of what Nintendo’s consoles will have to offer over the next couple of years. Metroid Fusion and Donkey Kong Plus remain the biggest Game Boy Advance surprises so far. Both are reported to be new games and not direct ports of the SNES versions.

We’ll have more goodness from Nintendo as the show progresses. Until then, feast your eyes on these gorgeous screens!