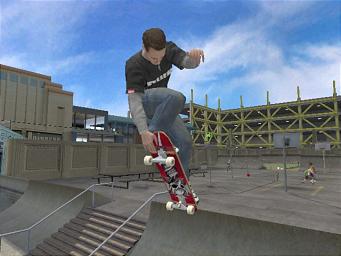 All Images (5) »
Props! The best skateboarding game around is due another sequel. Tony Hawk?s Pro Skater 4 is definitely coming to the Xbox ? here are the first screenshots to prove it.

Developer Neversoft is reinventing Pro Skater to give gamers the real life experience of a hardened amateur skater. A completely new career mode and ?Go Pro? theme compliments the same elements that have made the Tony Hawk's Pro Skater series a phenomenon. Players will trick their way up through the amateur ranks to prove themselves in the professional world of skateboarding.

"Video gamers have come to rely on the Tony Hawk Pro Skater series to push the boundaries of what is fun in a video game," stated Larry Goldberg, Executive Vice President of Worldwide Studios for Activision. " By taking full advantage of the power and capabilities of the next-generation platforms, the Neversoft team will take the game to an all-new level of interactivity and fun."

Sounds like Larry?s genuinely excited, and so are we. Expect to see Tony Hawk?s Pro Skater 4 on Xbox late in the year.