Graphically-stunning first-person action game allows players to control the future of the planet. 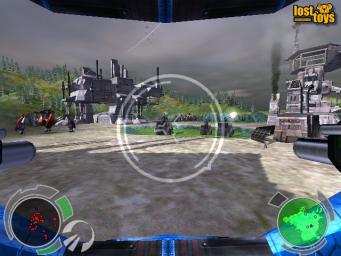 All Images (4) »
In the world of Battle Engine Aquila, a sudden climatic change brought on by centuries of atmospheric pollution reduces the continents of the earth to a series of small islands, triggering a global crisis. Dramatic betrayal propels an adolescent misfit into a heroic battle for survival. With land at a premium, tensions have built between the surviving nations, as each tries to stake claim to the precious dry land.

To navigate in the world, players take on the role of Hawk Aquila, pilot of the fearsome Battle Engine, a fully-armoured tank with the ability to fly and coast over land. With the aid of the world?s most powerful battlefield weapon, Hawk?s encounters take place in a vast war zone, with combat raging between two feuding sides?the Forseti and the Muspell. With thousands of units engaged in continuous confrontation, ranging from infantry to tanks, planes, battleships and artillery, Hawk must navigate the Battle Engine Aquila through the air, over ground and across the water in a campaign to swing the momentum of the struggle to his side.

?Players will be immersed in a series of exhilarating and frenetic missions as they take part in an epic saga that sweeps across a ravaged globe,? said Jean-Philippe Agati, Senior Vice President and Head of Infogrames, Inc.?s Los Angeles studio. ?Battle Engine Aquila gives gamers direct control of the ultimate weapon in a planet-wide shoot-out to create the most intense arcade experience available on consoles.?

Under development by Lost Toys, Battle Engine Aquila will feature a multiplayer split-screen mode and will make its debut on Xbox and PlayStation 2 this winter.