Today the Advertising Standards Association has issued a ruling against Electronic Arts over its advertising of Dungeon Keeper - SPOnG writer made it happen. 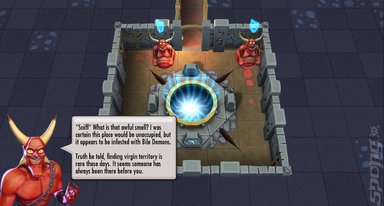 Today the Advertising Standards Association has issued a ruling against Electronic Arts over its advertising of Dungeon Keeper on iOS and Android. The ad implied that the game was free to play and made no mention of how players would need to continually feed the game money in order for it to function as intended.

The only person in the UK to make a formal complaint to the ASA was SPOnG writer and The Sausage Factory podcast presenter, Chris O'Regan, who writes: "EA denied this of course, but the ASA upheld the complaint by going so far as to define the term 'free-to-play'. This could have significant implications to the free-to-play model and may force publishers to advertise such games differently to ensure they don't fall foul of similar transgressions.

"In February of this year I received an email from EA suggesting I download Dungeon Keeper on iOS and Android 'for free'. Knowing how that particular game forces the player to continually pay small fees in order for it to function as originally intended, the ad was decidedly misleading.

"Noting this I wrote to the Advertising Standards Association and alerted them to this transgression on the part of EA. They then set about carrying out an investigation to determine whether my complaint had merit. After 5 months of research they decided it did.

"They have now levied a formal complaint against EA and by doing so defined the concept of 'free-to-play'.

"It should be noted that out of the millions of people who received this advertisement from EA, I was the only one who complained about it. This demonstrates that a lone voice can make a difference once they know what methods of complaint they can use to uphold their consumer rights."

Old Codger 2 Jul 2014 14:51
1/1
Excellent news. Well done! Another blow struck for the consumer!
Posting of new comments is now locked for this page.