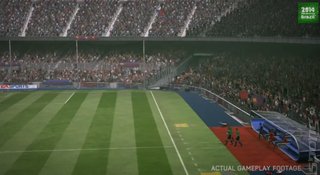 Free-to-Play (F2P) in or 'bait and switch' as no one ever calls it has moved from sad Facebook games into the big leagues with FIFA World for the PC from EA.

The game, which has gone into global open beta (and already has 1.5 million sign-ups following the closed beta and a limited open beta according to EA). The game's producer Alex Grimbley says:

?By bringing the FIFA franchise to the PC platform as a free-to-play game, we give millions of new fans their chance to experience the authentic FIFA experience, with award-winning gameplay and licensed leagues.

?At the same time, existing FIFA fans now have a new way to enjoy the game they already love, with fresh daily content and the ability to play on almost any PC.

?After four Closed Beta sessions and a limited Open Beta, where we saw over 1.5m fans register to play, we?re very excited to now open the game to football fans from all over the world.

?This is a great opportunity for fans to influence the development of our new game, and the feedback we?ve gotten so far has been absolutely instrumental in shaping our features and services.?