The much derided worst game ever made is dug up. 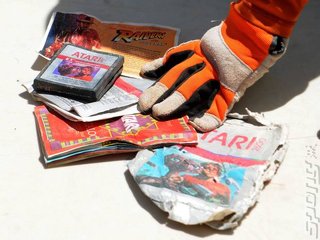 All Images (2) »
A legend has been turned to truth this weekend as thousands of copies of E.T. The Extra-Terrestrial on the Atari VCS 2600 have been dug up in New Mexico for a documentary to be aired via Xbox Live Entertainment.

On September 28th 1983 The New York Times reported the following:

"The company has dumped 14 truckloads of discarded game cartridges and other computer equipment at the city landfill in Alamogordo, N.M. Guards kept reporters and spectators away from the area yesterday as workers poured concrete over the dumped merchandise. An Atari spokesman said the equipment came from Atari's plant in El Paso, Tex., which used to make videogame cartridges but has now been converted to recycling scrap. Atari lost $310.5 million in the second quarter, largely because of a sharp drop in video game sales."

It was long thought that the game was the worst video game ever made (watch the video below). It was also thought that this title came into being because Atari - once a giant of video gaming - had spent upwards of $20million for the license to the 1982 movie for the game that was rushed out for Xmas.

The games were dug up at the weekend for a movie that is currently titled, Atari: Game Over that is being, "executive produced by two-time Academy Award winning producer Simon Chinn (?Searching for Sugar Man? and ?Man on Wire?) and Emmy winning producer Jonathan Chinn (FX?s ?30 Days? and PBS?s ?American High?), through their multi-platform media company, Lightbox. The film is directed by writer/director Zak Penn (?X-Men 2,? ?Avengers,? and ?Incident at Loch Ness?). It will air exclusively on Xbox One and Xbox 360 in 2014.

Check the game out: