3DS Coming Months Ahead of Wii U Version 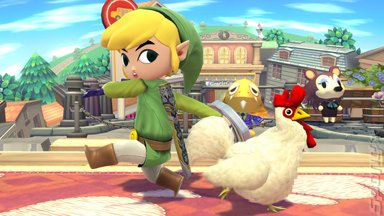 All Images (8) »
Nintendo dropped a boatload of details about Super Smash Bros. in its latest Nintendo Direct presentation, including information about release dates, new characters and a 3DS-exclusive mode.

In an interesting move series creator Masahiro Sakurai announced that the 3DS version of the game will be out this summer, while the Wii U version will be with us in winter.

The 3DS version will also get an exclusive mode dubbed 'Smash Run'. Information sent out by Nintendo tells us, "In this mode, four players have five minutes to enter a dungeon and explore the surroundings, fight enemies and obtain power-ups to enhance their fighters. Once the five minutes are up, all four fighters enter a battle arena using their newly equipped items and power-ups. Enemies encountered in the Smash Run mode are from a wide range of game series."

The 3DS version will also mostly run at 60 frames per second, according to Nintendo.

Brand new to the series will be Pokémon X and Pokémon Y's Greninja, the ultimate form of Froakie. Returning characters that were confirmed include Zero Suit Samus, Sheik, Yoshi and Charizard.

We could go on, but we won't. You can get all the information sent out by Nintendo here, or watch the presentation in full below. There are new screens in the gallery.

Ricky 16 Apr 2014 10:05
1/1
you remember those ones too ! the wine is still around (sometimes) the round table still around and the smoke i want it to be around but i feel sick every time i do damn it!(by the way, i found you on Etsy!! my etsy is coming up soon
Posting of new comments is now locked for this page.