Not one of those neverending delays... 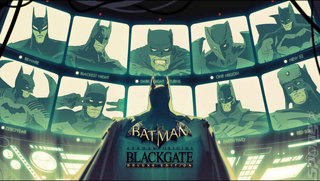 Batman: Arkham Origins Blackgate - a great hope for the Wii U has been delayed for the Wii U although it will be hitting its release dates.

Those dates are: Today, April 1st on the PC and in the Xbox Live Games Store, 2nd of April on the PS3. But as for the Wii U, well the story goes a little hazy.

No reason, not even the usual "adding some polish" is given.