Surely some of the best games news of all time! 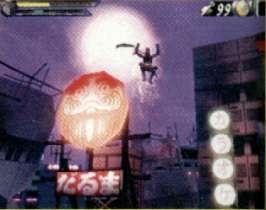 All Images (6) »
Sega of Japan has announced that it will be releasing an update to Shinobi, the seminal ninja platformer, this time for PlayStation 2.

Shinobi was first unleashed upon the world by Sega back in 1987 and was a smash hit in the arcades. It was instantly given ?masters game? status, due to its rigid and immediate reaction-based play mechanic.

This new version will be set in a huge 3D world and will concentrate on the same kind of mission-based action from the original. Also promised by Sega is the continuation of the series? ?massive boss? ethos that was the trademark of original Shinobi, Shadow Dancer and the Mega Drive classic, Revenge of Shinobi.

As you can see from these screens courtesy of Ruliweb, Sega has obviously taken great care in keeping the feel of the Shinobi world intact, exhibiting the quintessential mixture of a sprawling futuristic cityscape and traditional Japanese imagery.

No release date has yet been set, but expect some sort of announcement at E3 next month.