But no mention of PewDiePie in the official word. 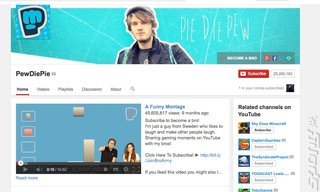 Next time someone tells you that you're never going to make millions by playing videos and swearing like a spoilt brat just point them at this story.

Disney has forked over $500,000,000 to buy Maker, the studio that deals with the massively popular PewDiePie Youtube channel set up and run by 24 year-old Swede Felix Kjellberg.

The official release states that, "With more than 55,000 channels, 380 million subscribers and 5.5 billion views per month on YouTube, Maker has established itself as the top online video network for Millennials.

What, no mention of PewDiePie? Not in that release.

TechCrunch reports this, "Maker was originally founded by a team of individual YouTube creators who hoped to leverage each other?s separate audiences and skill sets to increase the number of views and subscribers of each. Think of it as a sort of ?whole being greater than the sum of its parts? strategy.

"But over time it?s evolved into a much bigger business than those original founders could have possibly predicted. It represents thousands of creators who have hundreds of millions of subscribers and together have 5.5 billion video views per month."

Still no mention of PewDiePie, a channel that is definitely not the kind of family fare that is usually associated with Disney. Could this lack of comment on the videogame focused channel also be because, as Reuters reports, Makers, "backers include Time Warner Investments, Upfront Ventures and Greycroft Partners, is partners with PewDiePie, the online persona of 24 year-old video gamer Felix Kjellberg. Kjellberg has more than 25 million subscribers and is YouTube's single most-subscribed star."

Quite a bit of disentanglement to be done now then. But, in the light of Disney sacking huge numbers of its own game makers, it still considers gaming to be prime profit pudding.

Anonymous 26 Mar 2014 09:24
2/7
You do realise this studio has a lot more to do with just Pewdiepie, right? Just because you don't like the guy doesn't mean this entire thing has to do with him. This studio covers all kinds of youtubers.
more comments below our sponsor's message

It's freaking hilarious and has his real voice in the game, go look now!

anayomus 27 Mar 2014 16:22
5/7
@why_would_you_care?! Maybe cause he's another dumb f**kin internet personality. How many of those subscribers are active vs one timers? I'm sorry we don't all waste our day watch the s**t this dumb f**k posts on youtube.

Peanutbutterandpickles 28 Mar 2014 01:47
6/7
@why_would_you_care?! He actually has 25.3 million subscribers. Which is still A LOT, and he does have the most subscribers on Youtube, but definitely not 380 million. Just to make things clear.