New Angry Birds is an RPG

Rovio taking its loveable characters right into the face of Warcraft 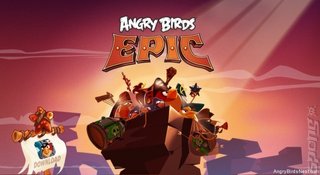 Rovio, clever people. They've decided to take their mysterious new game that we reported earlier in the week into the dark heart of Role Playing Game territory with Angry Bird Epic.

Yes, an Angry Birds RPG. Imagine the scope for microtransactions this gaming genre offers in the form of new spells, swords, armour, fast travel... it's a veritable goldmine. The spiel informs us that, "Explore a fantasy Piggy Island with everything from tribal villages and frosty mountains to tropical beaches and mysterious caves!"

EPIC Weapons!
You?ll be able to, ?Craft amazing battle-winning weapons like a wooden sword, frying pan or stick thingy with a sponge on top!?

EPIC Upgrades!
Gameplay will evolve as you, ?Level up your characters, armor, weapons and potions to become a legendary hero ready to take on the mightiest pig warrior!?

EPIC battles!
Wage war with, ?Turn-based battles between our heroic flock of warriors and those green snout-nosed scoundrels! It?s easy to play, but difficult to master!?

What more is there to say, except you know someone who will play this... it maybe you!
Companies: Rovio Mobile
Games: Angry Birds