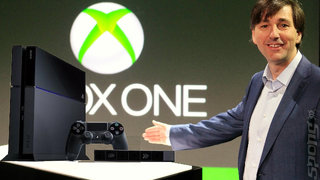 Good news for Nintendo: it is possible to rescue a hardware brand if you listen to customers and developers. A while back Sony's PS (PlayStation) brand was suffering with the PS3 under-performing against the PS2's massive success... but then...

"Sony Computer Entertainment today announced that the PlayStation 4 computer entertainment system has cumulatively sold through more than 6.0 million units globally as of March 2, 2014. This also includes the 370,000 units sold through in Japan since its launch on February 22." Woah now! "Sold through"? What does that mean?

Nevertheless these estimates aren't usually far off the mark. So, yes, good, good sales figures. As for software:

Not a terrible attach-rate then. We await Microsoft's response. And chin up Nintnedo.