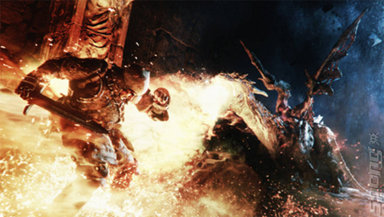 Kazunori Sugiura is the producer of Capcom's RPG Deep Down (which is not an reimagining of Origin's Ultima Underworld no matter what your granny tells you) and he's responded to calls of "SEXISMS!" from a UK games site.

?I was informed by a representative of one of our overseas branches that an article containing misleading information regarding Deep Down has been recently circulating and drawing some attention,? he explained to another site that provides advertising services to the site in question....

Yes, VG247 ran an article by the excellent Brenna Hiller that called out Deep Down for having no female characters to play. The article as called: "Deep Down the rabbit hole of ingrained games industry sexism". So it's both provocative and quite punny. In it Hiller states that:

"In a livestream event over the weekend, Capcom?s Kazunori Sugiura, producer of Deep Down, reportedly said the free-to-play PlayStation 4 dungeon crawler won?t include female playable characters.

"Why on earth would a game creator deliberately omit the entire female gender from its game? Because of the plot, apparently."

Her thesis is that, "Don?t let this answer satisfy you. Capcom wrote the plot. There?s no reason why it had to write a plot that excluded female characters...

"...The actual reason why Capcom has apparently chosen not to include women in Deep Down is that it can?t be bothered. It doesn?t want to spend the money to do so. It can?t see the point."

But Kazunori Sugiura has another reason. And he took to Eurogamer - a partner of VG247 in the Gamer Network - to make his case:

"My name is Sugiura and I'm a producer at Capcom Japan. I was informed by a representative of one of our overseas branches that an article containing misleading information regarding deepdown has been recently circulating and drawing some attention. This article makes the claim that the game has 12 playable characters, all of whom are male. As producer in charge of this project, I would like to respond and clarify.

"While the main character of deepdown is indeed male, he is the only playable character in the game. The story focuses on him and a group of allies known as the Ravens.

Still no reason not to have a choice that the single character can't be male or female unless the plot concerns Freudian father-son shenanigans or penis size comparisons?

Anyway, another angle is that, "Although no announcement has been made regarding an overseas release of deepdown, we are happy that the title is drawing attention in regions other than Japan. We hope to release more information soon.?

You betcha he's happy. What do you reckon? Storm in a teacup or big industry concern? Tell us over on the Free SPOnG Forum.

There's no reason not to either, talk about getting your knickers in a twist over nothing, and they wonder why no one ever takes them seriously.

It's up to the creator to decide if it's a story with the option of a main character, not winging journos.