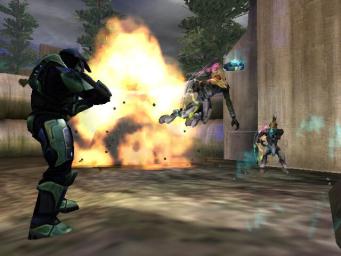 All Images (6) »
In one of Microsoft?s more positive days, the company has announced that its prime console-selling game, Halo: Combat Evolved, has hit seven-figure sales in the US and Canada.

Although Microsoft?s claim that Halo is ?the fastest million-unit seller ever for any next generation console? isn?t exactly true (Final Fantasy X shifted 2.3 million within three days), the result can only be regarded as good news to the console newcomer.

"We are thrilled that 'Halo: Combat Evolved' has won over Xbox gamers, with sales hitting one million units at an amazing pace," said Ed Fries, vice president of Xbox Game Content at Microsoft. "There's nothing like it anywhere else. It's only on Xbox. If you haven't played 'Halo: Combat Evolved,' you're missing out on the best video game experience available."

According to Fries, Halo: Combat Evolved is only the beginning. "Both Microsoft Game Studios and our third-party developers in the industry will soon be announcing a large line-up of amazing new titles and services that will further demonstrate the gaming experience and graphics performance only available with Xbox."

With Xbox now launched globally in all three major territories, sales of Halo are expected to climb further, albeit not quite as quickly. But the game-to-console selling ratio is astonishing when compared to any other results. As we mentioned in earlier news, 86% of UK gamers purchased a copy of Halo long with the hardware, a figure comparable with American hardware/game sales.

Whether or not Halo can reach the phenomenal 12 million sales of Nintendo?s Super Mario 64 remains to be seen. Good luck, Halo.