EA Adds World Cup 2014 to FIFA for Last Gen Only 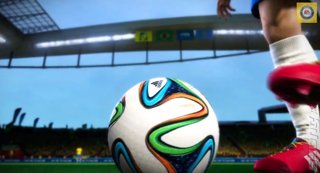 EA has released EA Sports 2014 FIFA World Cup Brazil the official video game of the tournament that sees soccer take over the telly until your team is eliminated, at which points you'll probably go back the gaming and sanity.

There's a video of the videogame below. The game comes with: "With 203 national teams, 7,469 players, 19 officially licensed managers, and 21 new stadiums including all 12 authentic stadiums from Brazil, the 2014 FIFA World Cup comes to life with more detail and authenticity than ever before. Feel the support of a nation with all-new crowd scenes including banners, flags, and seat cards in the stadium, and from Live City events in all corners of the globe. Score a goal with England and see fans react live from the center of London."