Should be coming out across all confirmed platforms in 2014 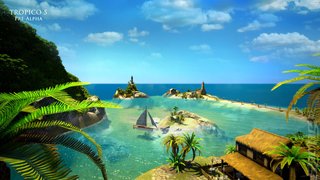 That's right; the Tropico series is set to make its debut appearance on a Playstation console. Yep, it'll be available some time this year for your PS2! Erm, we mean that new one... PS4, is it?

Tropico 5 was first announced for Xbox 360, PC and Mac last year, with publisher Kalypso Media recently confirming that the PS4 will also see a version of the title. No mention of Microsoft's new console, though.

For the first time in Tropico history, installment number 5 will feature multiplayer - that means both co-op and competitive modes that will support up to four players.

According to Global Managing Director at Kalypso Media, Stefan Marcinek "We have been evaluating many new and exciting development opportunities for the Tropico brand and by bringing Tropico 5 to PS4 we open a new chapter in the history of the game. By taking full advantage of the PS4's processing power the island of Tropico and El Presidente have never looked better,"

What do you guys think? Will we see an Xbox One version of the title? Is a next-gen version desired anyway? Let us know in the comments or oven on Facebook.
Companies: Kalypso