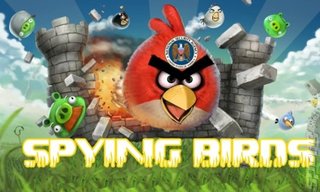 Rovio's Angry Birds - the game that is everywhere - has been accused of being of assistance to governments such as the UK's via GCHQ of enabling spy snooping. This has lead to the official Angry Birds site being hacked (see image).

The Guardian had reported that, "The National Security Agency and its UK counterpart GCHQ have been developing capabilities to take advantage of "leaky" smartphone apps, such as the wildly popular Angry Birds game, that transmit users' private information across the internet, according to top secret documents." And this was taken to mean by a friend of notorious hacker organisation, The Syrian Electronic Army, that Rovio was ripe for a hack.

The SEA tweeted that, "A friend hacked and defaced @Angrybirds website after reports confirms its spying on people | http://www.angrybirds.com "

The hack was spotted and Rovio quickly moved to patch up the site.
Games: Angry Birds