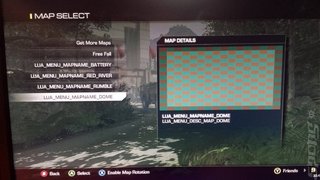 Infinity Ward's latest tweaks to Call of Duty: Ghosts bring something over from Black Ops while farewelling a mode. But that's the official stuff.

Unofficially, Reddit user Osiris OP has posted up a screenshot showing what might be the titles of the new Ghosts maps: Battery, Rumble, Red River, and Dome.

MP1st points out that, "It?s worth pointing out that two maps titled ?Dome? have been a part of the Call of Duty franchise; one in Treyarch?s World of War and one in Infinity Ward?s Modern Warfare 3. Also, as we previously mentioned, many users found Strike Zone from Call of Duty: Ghosts strikingly similar in layout to Modern Warfare 3′s Dome."

On the official stuff, which can be found over here at Infinity Ward itself it's made clear that the title update which will go live for Xbox One, Xbox 360 and PC today, with a PS4 and PS3 on January 29, sees Black Ops' Gun Game mode coming to Ghosts. Making way for it is Heavy Duty.
Companies: Activision Blizzard Infinity Ward
Games: Call of Duty: Ghosts