The new Doctor gets scripted by the guy who wrote the gaming adventures. 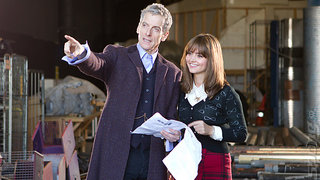 If you're in the camp of viewers who believe that Doctor Who has disappeared into a metaverse so self-referential and CGI'd that it's lost any appeal but you hope against hope that it'll come back on stream, then the news that Steven Moffat will be writing the first ep of the new series may depress you. However...

...hope need never die! The next episode of "Series 8" is being penned by a newer hand, albeit one that is already versed in Whovian lore. The Beeb has released the following info:

"The first episode of series 8 has been written by Steven Moffat with the second episode penned by Phil Ford."

Phil Ford has not only worked on The Sarah Jane Adventures, Torchwood and previous Who episodes, he's also worked on Doctor Who: The Adventure Games.

Good news or bad? Tell us in the comments.

Source: BBC
Games: Doctor Who: The Adventure Games: City of the Daleks