There are new costume packs and, erm, better graphics 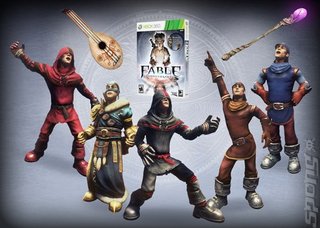 Microsoft and Lionhead have announced that Fable Anniversary has a launch date and also some incentives/bribes for you to go and buy it on day one.

Right, "it will hit the shelves on the 4th February 2014 in North America, the 6th February in Asia and the 7th February in Europe!" That means actual shelves too. But there is more.

Microsoft is "excited" to 'reveal' that "all first edition copies of Fable Anniversary will include additional content..." this includes "A 5x5 code for the Launch Day Outfits & Weapons Pack which will all be packaged up in a shiny, slip-on embossed case."

There are also famous Fable characters to dress in.