Says it is trying to keep retail healthy 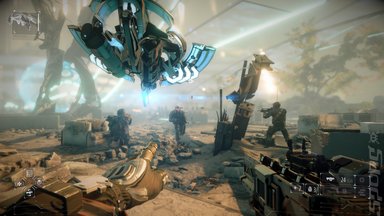 Sony has spoken up to justify the pricing of its digital versions of PS4 games. Titles such as Killzone: Shadow Fall and Knack have a price point of Ł52.99, higher than the price many retailers have set for boxed versions.

"First of all, we want to support a healthy retail channel, so it's not in our interest to go and seriously undermine retail," Fergal Gara, MD of Sony Computer Entertainment for the UK and Ireland, told Eurogamer.

"Let's not forget the UK is probably the most competitive retail space there is in the world. So when it comes to any recommended retail prices they will frequently choose to price significantly below them."

Gara made an example of Amazon, which prices very aggressively. The company has Killzone: Shadow Fall up at Ł48. The recommended retail price of Killzone, it's worth noting, is actually Ł54.99 - Ł2 more than Sony is selling it for.

And Sony isn't the only publisher with digital games up for more than their retail competitors. Titles such as Assassin's Creed IV and FIFA 14 are up at Ł54.99 on both the PlayStation Store and Xbox One.

Post-launch, Gara expects PS4 digital prices to be more comparable to those of retail. "Will there be a settling down and an alignment, and where would we expect digital pricing to be? We'd hope it would be roughly equivalent to street pricing for the disc. That's where we expect the dust to settle over time."

Gara said that 'full' games are still trying to find their place in the digital marketplace. "Buying full games digitally is still a relatively new thing. Buying DLC and add-ons is already a significant business. So I think we'll find the right level that allows retail to coexist, selling discs and giving a great high street presence for our games, but also the digital option to coexist alongside it."

Tension between customers and digital goods sellers over pricing of items that have a physical equivelant is hardly new. The likes of music, books and comics have all had/have similar issues. It's perhaps fairer to compare 'full' games to book publishing, in which publishers are trying to price ebooks against physical hardbacks, than to Steam, where there's often no equivalent physical product.

Jan|'14
PlayStation Vita Could "Do Without" Physical Sales
Nov|'16
Robinson: The Journey
Nov|'16
Until Dawn: Rush of Blood
Jan|'17
The Last Guardian