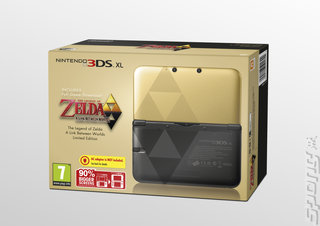 All Images (21) »
Nintendo will launch two new versions of the 3DS in November, themed to match two of their biggest icons.

One will carry a design based on The Legend of Zelda, while the other will be Luigi-based. They're being released to coincide with the launch of The Legend of Zelda: A Link Between Worlds and the more nebulous Year of Luigi. Both are 3DSes of the XL variety.

The Zelda edition launches alongside A Link Between Worlds on November 22nd and comes with a download code for the game. The cover will also be reversible, allowing owners to display the design in gold or full colour.

We'd describe them to you, but you're better off just looking at the pictures we've put in the gallery.
Companies: Nintendo
Games: The Legend of Zelda: A Link to the Past