Orient on great form until... the Curse of FIFA! 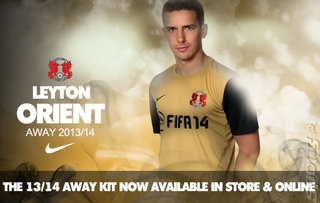 Guess what? A London-based footy team - Leyton Orient no less - whose away kit is sponsored by EA and specifically EA's FIFA 14 has been banned from playing FIFA 14 on matchdays for fear of a curse!

Leyton Orient communications manager Jonny Davies - yup, the PR guy for the club who probably arranged the sponsorship - explains the problem in a column in UK paper The Independent that mentions the video game more times than is decent.

The column is called, "The O Zone: With our new coach we played Oldham a day early on ?Fifa 14?" and mentions an away trip to Oldham.

" For the majority of the trip the lads, led by Lloyd James, got stuck into the new Fifa 14 game and at times even played as themselves against Oldham in preparation for the match the following day. The staff were quick to implement a ?no Fifa on a matchday? rule, however. The gaffer suspects several hours playing football on a video game is not conducive to a good performance in the real thing."

For its part, the Metro paper believes that... "The Os started the season in scintillating form, winning eight successive games to put them top of the table, but have failed to win a single match in League One since the game was released on September 27."