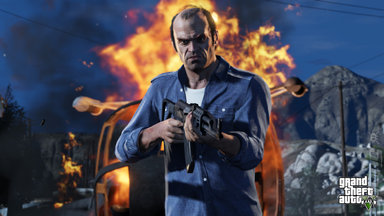 E3 2013
As if the Daily Telegraph's story about the Washington shooter's 'videogames obsession' wasn't low enough, The Independent newspaper has decided to isolate a single stabbing in London as a front page story because a copy of GTA V was apparently involved.

"London man stabbed and robbed of his copy of GTA 5" was that broadsheet's screaming headline. Bear in mind that The London Standard wrote a story in July that headlined, "1,000 knife crime victims in London each month, shocking new figures show", the Indie's story is low level stuff. It states:

"A 23-year-old man was stabbed and robbed as he walked home from an Asda superstore in North West London in the early hours of the morning.

"He had been out shopping for the latest title in the Grand Theft Auto videogame series, and was robbed of his purchase by the attackers."

Wow! Mugged for GTA V! NO! Even the report states:

"He was robbed of items he had bought from a nearby Asda supermarket, including a copy of Grand Theft Auto."

Oh, he was mugged... in London... for his shopping. Tragic for him indeed but it says more about London than it does about GTAV.