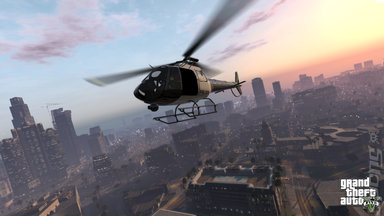 Completely gratuitous GTA V image... what?
All Images (2) »
GTA V is out tomorrow - did you know that? You did? So, the chances are that this Chart-Track All Prices All Formats video game chart for the UK will be the last one for months to have anything but GTA V on the top of it.

What it does have is Saints Row IV for the fourth week running. In terms of new entries of new games... there aren't any in the top 10. The nearest you have is Kingdom Hearts HD 1.5 Remix in at #2. The chart is below, and here is what Chart-Track says about it:

"From this week's new releases only one has an impact on the Top 10 with Square Enix's Kingdom Hearts HD 1.5 Remix debuting at No2. The PS3 exclusive which includes new content and characters makes a marked improvement on its original debut on PS2 back in W46 2002 where it reached No35. Activision Blizzard's Diablo III (-50%) remains at No3 for a second week while Ubisoft's Tom Clancy's Splinter Cell: Blacklist (-16%) is also a non-mover at No4.

"Further down the chart at No24 Solid Snake returns once again in Konami's Metal Gear Solid: The Legacy Collection while Sony's Puppeteer makes its debut at No40."