Retailers to open early, late and dress up in silly outfits 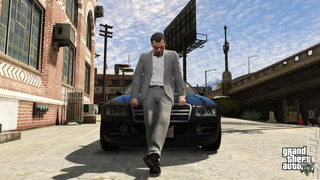 With GTA V being such an anticipated release, it's hardly a surprise that so many stores are hosting a midnight launch.

With that question at hand, I suppose we should fill you in on which retailers will be holding midnight openings shouldn't we? Check it out:

As for HMV, there's no exact number of stores yet, however, games boss Phil Bowes recently said: "The majority of our leading flagship stores will be opening at midnight to capitalise on the exceptional demand for this unique product.".

You may not believe this, but CoD: Ghosts is set to beat GTA V on the pre-orders front - click here for more info.

Imrana 27 Sep 2013 05:52
2/4
I would really like to say tahkns very much for your work you have made in writing this article. I am hoping the same effective job by you down the road also.
more comments below our sponsor's message

Pamela 28 Sep 2013 20:16
3/4
Wii InternetOnline gaming is a mreakt that no video game company wants to miss, and Nintendo is no exception. With that in mind, Nintendo not only designed the Wii to let players compete against each other online, but it also added an entirely different aspect of the Internet to its newest system-browsing. Once the Wii has been hooked up to the Internet, either wirelessly or with an Ethernet cable, you can purchase Wii Internet for $5. The full version of the Internet Channel, which is a version of the Opera 9 Web browser, was launched in April of 2007 and it allows Wii owners to surf the Web in a unique fashion. The font is much larger than it is on a computer, so it is a lot easier to see from the comfort of your couch. You can also zoom in and out and scroll up, down and sideways using the Wii remote. The Wii Internet Channel takes only a few seconds to launch, mostly because it stays connected to the Internet even when it is powered off. The software is saved on the 512 MB Wii internal flash memory. The software can also be transferred to an SD card after you download it, although temporary Internet files will remain on the internal memory. The Opera-based browser can support a host of Web 2.0 technologies and applications including:CSSJavaScriptAjaxRSSAdobe Flash 7WidgetsThe biggest gripe about the Wii Internet Channel is that the browser does not support Adobe Flash 8 or 9. According to Opera, the reason that the browser does not support the later versions of Flash is that a software development kit is not yet available for either version. Because Opera utilizes an older version of Flash, problems may arise while you are trying to view certain Flash videos. Aside from the problems on the user's side, Nintendo is also having a bit of trouble with the Wii Internet Channel. Apparently, hackers have found a loophole in the system that allows them to run their own code on the Wii console. The loophole is in the Flash Player embedded within the browser and could allow hackers to create video game emulators. That sounds like a great loophole, right? Not if you're Nintendo. One of their potential moneymakers is the Virtual Console, which charges gamers between $5 and $10 for unlimited access to a retro title. The Wii can use an Internet connection in more ways than just browsing. There are also free applications such as Wii's News and Forecast Channels. The News Channel provides you with a view of the globe, which allows you to view news by region if you wish. The Forecast Channel also gives you a view of the globe, but this view also shows current weather systems around the world. If you zoom out far enough, you can see an accurate star map in the background. Since you register your Wii's locations, it also knows what you're looking for in the way of a local forecast.Wii AccessoriesThe Nintendo Wii, like every other video game console, has some controller variations and other accessories available for serious gamers. Some of the accessories are very useful, while others merely add to the aesthetic value. Some examples of Wii accessories that fall into the looks good, but not very useful category are the plastic attachments for the Wii remote that make it look like a tennis racket, golf club or baseball bat. Nothing about the Wii or the game you're playing changes the attachments just transform your Wii remote into a prop. There are also boxing gloves that can house the Wii remote and Nunchuck. Just like the plastic attachments, these gloves don't change anything about the game, except for the fact that you don't actually have to hold onto the controllers. http://mmnepuyrw.com mtmptnug [link=http://pcymhpwpsn.com]pcymhpwpsn[/link]