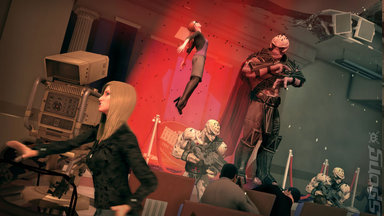 As you can tell from all the Houser profiles and interviews in mainstream news, and TV news being all over video games, GTA V releases next Tuesday. That means, if you're a publisher and you've got a game in the pipeline, you'd better get it into the shops NOW or you're not getting TV or shop front or any attention at all.

Hence Diablo III and Total War: Rome II and Killzone Mercenary and Farming Simulator 2013 all hit the Top 10. However, the #1 spot remains in the grasp of Saints Row IV.

Chart-Track says of this state of affairs that, "Saints Row IV (-48%) takes the crown for a third week and prevents Rome: Total War II from becoming the first PC-only title to take top spot since Guild Wars II (W35 2012) by just a few hundred sales.

"The sequel to 2004's Rome: Total War tops its predecessor by over 4,000 sales for week 1 and is the first of two event titles (Tuesday release) in our All Formats Top 10. Originally released by Activision, Sega have taken over publishing duties for the much anticipated sequel.

"The second Tuesday release shows as a re-entry at No3 with Activision Blizzard's Diablo III making its first outing on Xbox 360 and PS3 following the PC release in May last year. Ubisoft's Tom Clancy's Splinter Cell: Blacklist (-51%) drops two places to No4 while Disney Infinity (-22%) slips a place to No5. Minecraft: Xbox 360 Edition (-23%) slips to its lowest position since launch at No6 but stays ahead of Payday 2 (+51%) which continues an impressive week-on-week climb to No7. New at No8 is Sony's Killzone: Mercenary which becomes the 5th best launch week for a PS Vita title. It's also the second outing on a hand-held for the Killzone series following the launch of Killzone: Liberation on PSP in W44 2006. Ubisoft's Rayman Legends (-16%) slips from No6 to No9 although it does receive a slight boost in the form of the PS Vita version which arrived this week. The final new entry in this week's Top 10 is a first for home consoles as Farming Simulator 2013 arrives for both Xbox 360 and PS3.