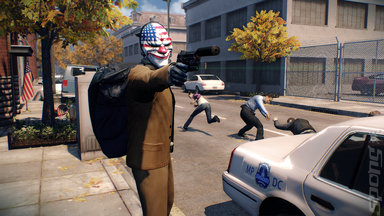 The UK video games - all formats - charts are in. Compiled by Chart-Track via data sent from a selection of High Street retailers this week's show that finally Minecraft for Xbox 360 has been toppled from the top spot.

505 Games' Payday 2 is the violent culprit that has done the dirty deed - becoming 505's first #1 since Sniper Elite v 2 last year. According to Chart-Track:

"The sequel makes the jump to console following the great success of the original Payday: The Heist which was released as a digital download only. Minecraft: Xbox 360 Edition (-14%) drops down to No2 while a strong boost in sales sees Call of Duty: Black Ops II (+60%) continue its impressive climb back up to No3. FIFA 13 (-18%) drops two places to No4 while Nintendo/ Animal Crossing: New Leaf (-9%) holds its position at No5.

"Further down the chart there is little movement with The Last of Us(-19%) still holding at No6 while The Smurfs 2 (-31%) is pushed down from No3 to No7. Both Lego Batman 2: DC Superheroes (-0%) and Tomb Raider (-10%) are non-movers at No8 and No9 respectively. Perhaps in anticipation of the hotly awaited next instalment, Take 2's Grand Theft Auto IV (+6%) just edges out Ubisoft's Assassin's Creed III (-10%) for the No10 spot."