Watch the lush trailer and get the dates and then GET ORF OUR LAND! 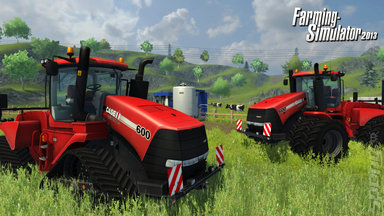 Gamescom 2012
Not all fields in video games have to be drenched in the blood of your enemies - unless your enemies are wheat and their blood is... erm. Anyway, Farming Simulator 2013 is coming to PS3 and Xbox 360 and we know when.

On the 4th of September that's when. According to the bumpf it's "Way more than a simple port, the console versions of Giants Software?s hit title bring its fair share of new content: an exclusive American environment and plenty of new vehicles!" Now, there is no mention of the high suicide rate among farmers, nor their largely singleton lives spent with... wheat. Nor is there anything mentioned about a level of the game whereby you have to argue with Daily Mail readers about the size of your subsidies. So, let's use the trailer to discover what is in the game.... 'trailer', geddit?