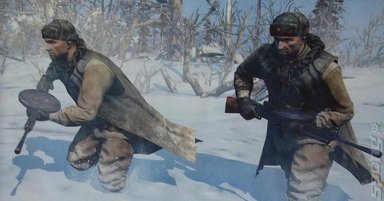 Making war games out of sticks and rocks in the nearest field, or maybe plastic soldiers in your bedroom, is unlikely to lead to political argument and your rocks getting pulled. The same is not true if you make money from portraying the mass slaughter of millions. SEGA and Relic have just discovered this as Company of Heroes 2 is pulled in the former Soviet Union.

Russian distributor 1C-SoftKlab is currently not selling Company of Heroes 2 because it, and consumers in Russia and its outlying, previously satellite, countries have objected to the way that the Red Army is shown. The distributor - translated by Google - states:

"In connection with appeals of people who consider unacceptable number of episodes of the game, the company "1C-SoftKlab" chose c 26 July 2013 to stop selling PC game Company of Heroes 2 (developer - Relic Entertainment, publisher - SEGA) in the territory of the Russian Federation and CIS . At the moment we are analyzing the situation and inform the developer and publisher of Company of Heroes 2 ."

SEGA has issued a statement itself that reads, "Sega and Relic are aware of the press stories circulating concerning Company of Heroes 2 and the historical context of the game from a Russian perspective.

"At this time we cannot offer any further comment, however we are taking this issue very seriously and are investigating these concerns thoroughly with all relevant partners."

Not only is SEGA having to consider action, so is Valve via a Change.org petition that currently has more than 17,000 signatures. It asks Valve to "Make the 'Company of Heroes 2' game unobtainable in the CIS (Commonwealth of Independent States) countries."

It says that, "this game's plot involves the complex matter as the USSR history in the WW2. One does not simply get a random 'parahistory' book and write a story that sells in millions of copies. The way the game developers see the conflict is disgusting.

"Here in CIS we do believe that WWII was won by the Allies, who do represent the best of human qualities like bravery, cunning, self-sacrificial courage and honesty. The game developers see the best of the USSR as an instantly evil thing. It's not like that at all."

The fighting on the Eastern Front, around Stalingrad and in the approach to Moscow was some of the most vicious in the entire WWII conflict with both the Soviet Union and the forces Nazi Germany wasting millions of lives as both totalitarian states vied for political supremacy. Having visited Russia myself, I can report that the scars of the War remain raw.

So, the quote "We don't spend too much time on the sensitive issues of political ideology," made by CoH2 lead campaign designer Jasen Torres to Eurogamer, sounds fine in a PR interview but less so in the cold light of reality.

Torres also pointed out that the game is,"about the troops on the battlefield. It's about their stories. When you get down to it, they're regular guys fighting for their homeland and their family. They're not by and large a high up political leader with ideologies spreading to the masses. They're just the normal guy saying, if I don't guard my homeland I won't have a homeland. That's the story that's evident even in gameplay."

You can see more of a flavour of the negative reaction in the video below.