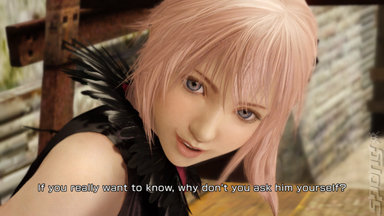 Lightning Returns: Final Fantasy XIII is the next stage in the development of the mighty Japanese RPG that over the years has set the standard for other games to follow. Except the words 'development' and 'mighty' are wrong.

Nobuhiro Goto and Motomu Toriyama are the youngish developers of the new title - due out in 2014 on the major platforms - and they appear to feel that, well, read the following from a QA they carried out about the game.

"Q: Has [main character] Lightning gone from a C cup to a D cup?

Goto: Well, Toriyama-san said he wanted them bigger, so…

Toriyama: Hey, don’t try to escape responsibility for this!

Goto: Yes, we made them bigger.

Q. Was it a C cup, up until now? Are her breasts going to jiggle, this time?

Toriyama: It depends on the clothing. Like if she’s wearing corrective underwear."

Seriously? Well, yes. The great game series is apparently by boobs, about boobs and for boobs. Maybe you think that's fine and helps us all to attract more gamers? Tell us in the comments or over on the SPOnG Forum.

Source: Famitsu via Wired and thanks to Chris for the heads-up!
Companies: Square Enix
Games: Lightning Returns: Final Fantasy XIII

??? 31 Jul 2013 22:30
2/4
oohh noo, apparently making somewhat realistic (breast) physics makes all of Final Fantasy look bad (/sarcasm)... does adding "jiggle" to a game really make it, and everything before it a joke?
more comments below our sponsor's message

Pclar09 1 Aug 2013 09:25
4/4
I'm about sick and tired of this. IT WAS A Q&A! Someone asked the question, they answered with the truth. They did not dwell on it overly and they had a laugh and moved on. Why are people getting so put out over something so minute!? Final Fantasy has been a franchise around since the '80s. What is with the arogance and audacity critics and two-bit reporters possess to think that, just because they added boobs and physics to the game that suddenly their franchise is "no longer what it used to be" or "dead" as some people are saying? This is so frustrating! Have we become so critical that now we don't even wait for the game to be released (nevermind even playing it) before we start picking it apart. If FF13:LR fails it will NOT be because of boobs or boob physics. Please, people, let it go!!
Posting of new comments is now locked for this page.