We asked the questions, he answered them. It was that simple! 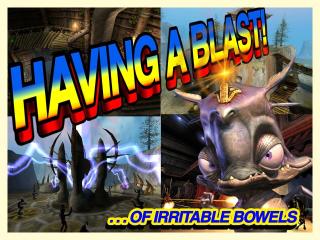 With the Xbox now launched into Europe, we caught up with Lorne Lanning, the creator of Oddworld and co-founder of Oddworld Inhabitants. Looking a little bit like a stage magician, Lorne answer our questions frankly on all things Odd.

Question: What do you have planned for the future and what do you think of Munch?s Oddysee?

Lorne Lanning: I?m never fully happy with any game we make, because simply, there?s always more to do and I?m a perfectionist. As far as the future of the series goes, we are looking to establish exactly what is possible with the Xbox system. Technological possibilities need to be understood and we?re coming along at a good speed. As far as the next games in the series, I cannot tell you anything really about their content specifically. We are hard at work on a new game and graphics engine that will realise a great improvement. All of the next games will be Xbox exclusive.

Q: What technological advancements will be made? How much of the Xbox?s power is used in Munch?

LL: At present we have been using around 50% of the machine?s power, which isn?t a great deal when you consider how good the game looks. We are working towards creating a fully procedural-3D texture-mapped world for the next game. There will also be much more varied worlds to explore. The gameplay and look of the game will have a more modular feel. The storyline will be more straightforward and will contain more surprises and tricks with an evolving theme and will have a distinct movie feel.

Q: How did it feel to be involved in the most startling piece of adultery in recent games industry history?

LL: (Laughs) We tried to close the deal with Microsoft before the PlayStation 2 launched as we didn?t want people buying a machine specifically for a Oddworld game that would never appear on the system. It has been a welcome break to program for the Xbox, in fact, I would say it?s a joy to work with the machine. Making games for PlayStation 2, especially in the early days, was really hard work. Microsoft, unlike Sony, went to the trouble of asking developers what they wanted from a games console. Also, Microsoft sends us cheques!

Q: When are we likely to see a new game in the series?

Q: The latest Oddworld game featured a large amount of strategy play. Will this trend be continued in the next game?

LL: The next game will contain more strategic elements than Munch did. We have made the decision to move away from platform gaming and will be creating a game that has some fairly involved strategy elements.

Q: How did you formulate the voices for the game?

LL: With a stick in my mouth most of the time!

It?s an odd world alright! Thanks to Lorne for giving us a few moments of his time.