Surgeon Simulator Dev: DLC Discovery is Not a Half-Life 3 Tease

Hopes, dreams, reasons for being crushed 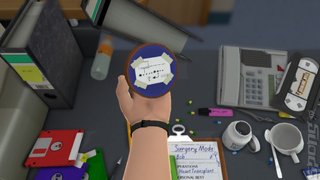 Bossa Studios head Henrique Olifiers has trampled theories that an Easter egg in his company's Team Fortress 2-themed Surgeon Simulator DLC tells us anything about Half-Life 3.

The image to the right was turned up in the DLC and, after some mental acrobatics that we won't go into here, a theory emerged that the information contained in that note adds up to September 26, 2013. The date was believed to be Half-Life 3 related.

Alas, Olifers told VG247 in an email that, ?Yep, this was an interesting one to wake up to this morning, I give you that. The easter-egg is a fundamental part of an upcoming July update of the game, but nothing to do with a Valve title, I?m afraid.?