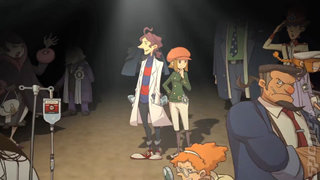 Level-5 has made its Layton debut on iOS - but it's not the Nintendo DS puzzle adventures that you might be expecting. Instead, iPhones around the world have been treated to a crime-based spinoff called Layton Brothers Mystery Room.

Alfendi Layton, who stars in the mobile app, is actually the son of Professor Layton, and must use his investigative powers to solve brutal crimes, with the aid of his assistant Lucy Baker. It sounds very similar in style to Capcom's Phoenix Wright: Ace Attorney series, and we're absolutely okay with that.

There's a free version of the game which offers the prologue and the first two cases, with download packs offering six more cases that help unravel a broader storyline. Cases 3-6 are available for Ł1.99, and 7-9 can be purchased for Ł1.49.
Companies: Level-5