"These are big games that take a long time" 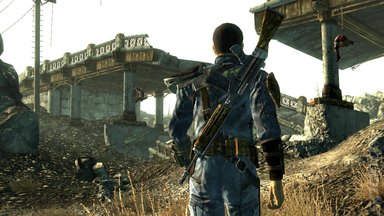 Everyone and their dog is asking about Fallout 4. Is Bethesda working on it? When will it be out? Will we be in the Capital Wasteland again? Well, VP of PR and marketing Pete Hines seems to have answered the first question by somewhat confirming its existence. He does this by telling fans to go easy on the other two questions.

"I mean [fans] have been clamouring for a Fallout game for a long time now," he said in an interview with Polygon. "What people need to understand - whether it is Bethesda Game Studios, Arkane or anybody - [is that] expecting information like that in any short period of time after they moved off one project to the other is really unrealistic.

"We are not into annual franchises - just trying to spin out a version of our game year, after year, after year - like, we have never done that, I don't see that it is something that we are doing anytime soon. But that doesn't mean that we are going to take our time and wait six or seven years in between a game that a studio puts out.

"But these are big games that take a long time and folks need to understand that we have a very certain way of going about things."

And that explains why there was no Fallout presence at E3 this year. So, reading between the lines, we can take it as read that there probably is a Fallout 4 game being made, but it's a bit far off so Bethesda doesn't really want to talk about it yet. That's cool with us, Pete. We can wait.
Companies: Bethesda
Games: Fallout 3