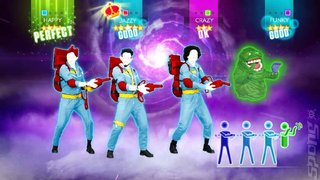 We all knew it was going to be announced anyway, but the cat's out of the bag early. A listing on the official Xbox website revealed the existence of Ubisoft's Just Dance 2014, hours before it is likely to debut at the publisher's E3 press conference.

The listing, which has since been removed, included a blurb detailing the social connectivity that features in the game, as well as a screenshot that reveals that the Ghostbusters theme will be included. Avatars will be transformed into Ghostbusters, with one character assuming the role of Slimer.

Here's what the blurb said. "The latest opus of the Just Dance franchise will make you dance even more and will be once again the ultimate casual rendezvous of the year. This new opus will be even more social as you will be able to connect and dance with players from all over the world and share a unique dancing experience with them.

"It becomes the party expert and features today iconic pop culture references. New modes will be available, letting you and your friends experience parties the way only Just Dance knows how." It's naturally heading for the Xbox One, but is likely to be a multiplatform title.

A dump of all the images from the leaked page has appeared on NeoGAF.
Companies: Ubisoft
Games: Just Dance 4