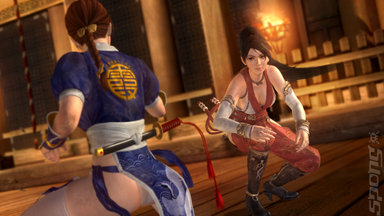 Tecmo Koei is trying something new with its latest Dead or Alive release. As well as releasing Dead or Alive 5 Ultimate, the publisher will launch a free-to-play version on PlayStation 3 titled Dead or Alive 5: Core Fighters.

As the name suggests, the free-to-play edition will include the "core" game (all of the game modes excepting Story Mode), along with four playable characters - Kasumi, Ayane, Ryu Hayabuse, and Hayate. Online play is included, meaning that you can battle other "core" owners and those who have the full version of the game at no extra cost.

Where the money does come into play is in the purchasing of characters and Story content. Story mode will cost $14.99, while each of the 25 characters that will be made available will cost $3.99.

Dead or Alive 5 Ultimate will see a retail release on September 3. The free-to-play version will be released on the PlayStation Store on November 3. The latter will be exclusive to Sony's platform for the time being, with Tecmo Koei noting that an Xbox release is "possible" in the future.
Companies: Tecmo Koei
Games: Dead or Alive 5: Ultimate