Quantum Break to Merge TV and Gaming Experiences Together

Looks set to start a trend, no doubt. 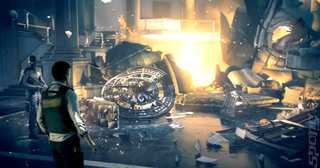 With Quantum Break, Remedy and Microsoft Studios plans to blur the lines between TV and video games, in much the same way as this past generation has tried to merge Hollywood movies with games. Sounds like fun.

According to an interview with Polygon, Microsoft Studios exec Phil Spencer spoke of how the two companies are "trying to push the boundaries of how people think of live action and gaming today. The unique capability of Remedy, I think is around storytelling... And television's always been a great place to tell strong stories.

"We've got this interactive component... where actions in one and viewing in one, impact what people are doing in the other. That's our creative idea. The team has enough momentum in that space, I thought, so it was a great opportunity to put them on stage and show something. We'll talk more as the game evolves."

Remedy, of course, was behind the rather enjoyable Alan Wake - which also married gameplay with TV sensibilities (in terms of episodic presentation) - but seems to be going much further with Quantum Break, which creative director Sam Lake says is the studio's "most ambitious" game yet.

"What makes it really interesting is the show connection," he told Major Nelson in a recent podcast (via OXM). "We do have a live action show to go with that, and link to it in a very, very interesting and exciting way - creating this really big interactive experience together - the game and the show."

So, transmedia. It's the future. Given Microsoft's focus on TV (even when talking about games) during its Xbox One reveal, it's clear that Quantum Break is likely to be the first of many such projects. Which is all well and good, but whatever happened to just making games, eh?
Companies: Microsoft Remedy
Games: Quantum Break