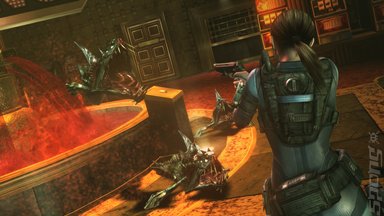 Capcom has got to be really pleased that it's still got the rights to Resident Evil, given that the old and beloved IP rarely if ever stops making money. Take, for example, the multi-format Resident Evil: Revelations hitting #1 in the Chart-Track UK charts this week.

Says Chart-Track, "Capcom can celebrate a second title to reach No1 this year (after DMC in week 3) with Resident Evil: Revelations which actually shows as a re-entry at No1 - the title was originally released on 3DS back in week 4, 2012 (debuting at No6) and is now available on 360/PS3/Wii U/PC as a hi definition port."

The chart organisation further states that, "EA's FIFA13 continues to climb again, up another place to No2 thanks to more price promotion. Last week's No1 Deep Silver/Koch's Metro Last Light (-33%) drops to No3, followed at No4 by Deep Silver/Koch's Dead Island: Riptide (-28%). Nintendo re-enter at No5 with Donkey Kong Country Returns thanks to the new 3DS version ? much like Capcom above this is a game that featured some time ago, in this case even further back as the original Wii version launched in week 48, 2010, debuting at No13 and then reaching No7 in week 50/2010. The only other new release to make this week's Top 40 is Activision Blizzard's tie-in to the recently released Fast & Furious 6 movie with Fast & Furious: Showdown debuting at No14."