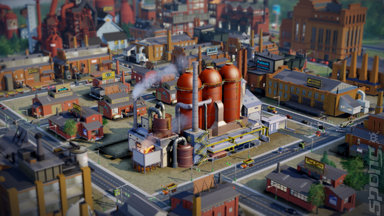 E3 2012
Holy smokes! Maxis wasn't kidding when it said it had a rather significant number of updates included with the SimCity 3.0 patch. It's huge, tackling traffic issues, Zone tuning, hotels and delivery vehicle routing among many more.

The patch was confirmed to be in development earlier this week, but Maxis has released a full list of patch notes, which you can peruse below. On the one hand, it's great that a developer is putting so much time and effort into fine-tuning the SimCity experience... on the other, it's somewhat sad that so much time and effort needs to go into fine-tuning the SimCity experience.

What do you think? Let us know in the comments section below.

Traffic: Commercial and industrial buildings stagger their work shifts to start throughout commute hours instead of at the top of the hour. This should reduce traffic.

Traffic: Fixes one issue where a car won?t move causing traffic to back up behind it.

Traffic: Vehicles can now make right turns on Red. This should improve some cases of traffic.

Service Vehicles: Fix for disappearing service vehicles on cities that whose vehicles had disappeared before update 2.

School Buses: Fix for issue where school buses were getting stuck at neighbor?s city or arcology.

Trading: Fixed issue where fire services were not trading consistently between Brakeman?s Folly and Twain in Whitewater Valley.

RCI Tuning: Fixed issue where sims going to a park via transit would sometimes lose their money or happiness on the way home.

RCI Tuning: Less Happiness is taken from wealth 2 and 3 buildings when rent is due when no money is present.

RCI Tuning: Fix for issue some users experienced where buildings would stay abandoned because moving trucks would not be able to move in.

Trees: Trees now last longer, but also do not eliminate as much ground pollution.

Transit: Streetcar stops can now be placed directly on standalone streetcar tracks, and passengers can walk along the tracks to them.

Transit: Tuned the chance buses or streetcars will go to high-traffic stops first as a minor traffic improvement.

Delivery Trucks: Fixed issue where some users would experience a loss of resources is their delivery trucks returned to garages without proper storage.

Sports Parks: Tuned the amount of skateboarders and neighborhood athletes at the sports parks.

Buildings: Addressed some cases where buildings would stack on one another.