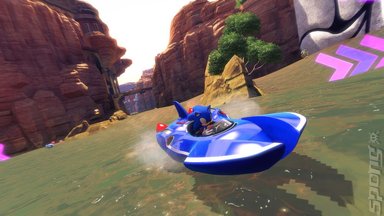 SEGA's massive restructuring of its Western business last year seems to be paying off.

The Japanese publisher recorded an annual profit of Ą33.46 billion (roughly Ł213 million) across all of its businesses, a 53 per cent increase on the previous year's Ą21.82 billion (around Ł139 million). While its net income was up, game sales were down 2.1 per cent at Ą83.8 billion (about Ł535 million).

SEGA's best-selling game for the period was Sonic & All-Stars Racing Transformed, with the game deservedly shifting a successful 1.36 million copies in Europe and the US. We reviewed it here, and thought it was fantastic.

Less fantastic was Aliens: Colonial Marines. But, despite getting a critical panning the game ended up being SEGA's second-best selling title, with 1.31 million copies to its name. Other big sellers included Football Manager 2013 (940,000 copies) and the Official London 2012 video game (680,000 copies). Japan-only Yakuza 5 shifted 590,000 units on PS3.

The company announced plans to double down on mobile and digital software, in light of an uptick in performance in the area. Registered users for free-to-play MMORPG Phantasy Star Online 2 exceeded 2.5 million, and money generated from microtransactions exceeded expectations.

Looking ahead, SEGA expects to sell 11.6 million units of packaged games, as it targets development on PS3 (7 SKUs), Wii U (7), Xbox 360 (4), 3DS (6), PSP (2), Vita (5) and PC (11). Curiously, its financial statement adds that it "also intends to make our game software compatible with the next-generation game machines, which are due to be launched." Nice.