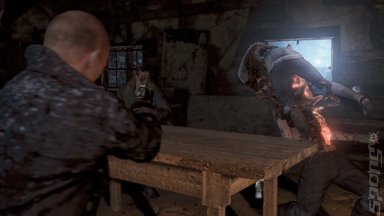 Gamescom 2012
Capcom has announced its financial results for the business year ending March 31 2013, and with it comes some curious information about the sales of some of its big releases. Resident Evil 6 failed to meet expectations, whilst RPG Dragon's Dogma did the opposite, exceeding sales targets.

Here are the figures: Resident Evil 6 was expected to shift seven million copies by the year's end. It managed to sell 4.9 million units. Dragon's Dogma, on the other hand, sold 1.3 million units, impressing executives of the Japanese publisher. Ninja Theory's Devil May Cry reboot sold a "solid" 1.1 million copies, due to "stable popularity in overseas markets."

The company had halved its profit guidance last month - possibly when it became clear that Resident Evil 6 wasn't going to perform as well as anticipated. As a result, the numbers that have been published today have fallen nicely in line with Capcom's own (revised) guidance, with net sales at 94.1 billion yen (Ł613m) and net profit at 3 billion yen (Ł19.6m). That a rise of 14.6 per cent and a fall of 55.8 per cent respectively.