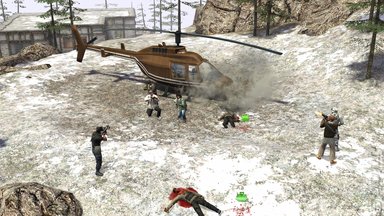 Jagged Alliance: Crossfire
Retro RTS game Jagged Alliance lives on, as Danish indie studio Full Control has today announced that it is working on a new multiplatform title for the treasured franchise.

The studio signed a licensing agreement with bitComposer Games, kicking the series back into life following a 2010 reboot (Back in Action) that saw a mixed response from fans and critics alike. According to both parties, the deal was made after bitComposer had seen Full Control's work in reviving Space Hulk.

CEO of Full Control, Thomas Hentschel Lund, said that "Jagged Alliance fits perfectly into our company strategy and portfolio as the game to do after we ship Space Hulk. It is one of the 3 games besides X-Com and Fallout that really defined the entire genre and is part of our DNA.

"We are honored and excited to have been the confidence given by bitComposer to give the series a fresh new take whilst staying true to the core mechanics."
Companies: Full Control
Games: Jagged Alliance: Gold Edition Space Hulk