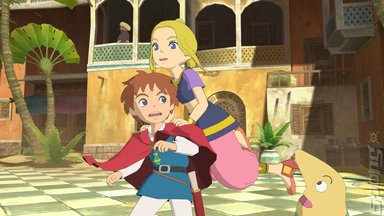 Tokyo Games Show 2012
Those of you who were impressed with Ni no Kuni's graphical and gameplay majesty will be excited to hear that developer Level-5 is working on a PlayStation 4 game. And it is being built with the console's networking features in mind.

"It's still in the planning stages, but we are also working on a PlayStation 4 title. We might be able to announce it soon," said studio CEO Akihiro Hino to Nikkei (via Gematsu).

"PlayStation 4 is next-gen hardware built with the network in mind, so more than graphics performance and specs, we need to think about communication - how to use the network features."

Sony formally announced its next-generation console at an event in February. While the console was not shown, a lot of its architecture and philosophies were shared with the public, including a built-in share button on the DualShock 4 controller that allows players to instantly broadcast video footage of the last 15 minutes of gameplay.
Companies: Level-5
Games: Ni No Kuni: The Wrath of the White Witch