3DS and Vita game to launch alongside it 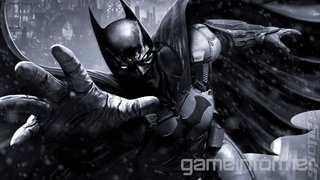 All Images (2) »
The next Batman game will carry the name Arkham Origins, and it will be the first game in the Arkham series not to have Rocksteady at the helm. On top of that, a separate handheld title is coming.

Taking over for this instalment is Warner Bros. Montreal. According to Game Informer, the studio has full access to Rocksteady's custom modified Unreal engine to get the look and feel right.

As the title suggests, the game is a prequel. It pitches a young, inexperienced Bruce Wayne against many of his enemies for the first time. Speaking in a 'coverage trailer' (yes, apparently that's a thing) an unnamed WB dev says, "We've got eight of the best assassins in the world who have come together to Gotham City for one night - Christmas Eve, of all nights - to kill the bat."

The Game Informer cover shows us that Deathstroke is one of the assassins.

ghoti 10 Apr 2013 11:32
1/1
Speculation: Is this because Rocksteady are busily working on a next-gen Batman title?
Posting of new comments is now locked for this page.