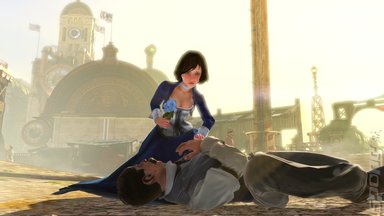 Irrational Games' BioShock Infinite claims the top spot in the UK Video Game Chart for a second week running, despite Chart-Track recording a sales drop of 75 per cent for the Spring blockbuster.

Today is also a good day for the industry's latest buzzword - transmedia. Trion Worlds' Defiance, an MMO action game that is being supported by a TV series on satellite channel SyFy (that airs on April 15, by the way), debuts at #3 this week as the game drums up some awareness for the brand.

The rest of the chart is largely uninteresting for those that checked the Top 10 last week, as much of it has stayed the same. Gears of War: Judgment has dropped a few places to #6, while Skylanders Giants and Need for Speed Most Wanted clawed their way back into #9 and #10 respectively, and Assassin's Creed III hopped up a position.