Shigeru Miyamoto Interview Part 2: The most complete interview anywhere on the web

This is the reason you've been wishing the weekend away. We ask, Miyamoto answers - the conclusion. 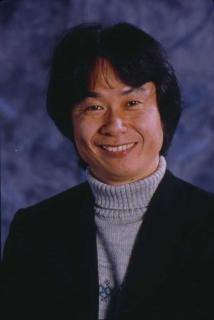 In the second part of our interview with Mr Miyamoto, we find out about some of the more pressing issues at Nintendo HQ, including possible Square development, Nintendo?s hardware strategy, Yamauchi?s retirement, and much, much more.

Question: How do you think that Mr Yamauchi?s imminent retirement will affect the future of Nintendo?

Miyamoto: Well I have to say that I don?t really know. For example, in the time following his retirement, it will depend on how much influence he will put on Nintendo. We have all learnt a lot from him regarding how Nintendo should be operated, so even after he leaves, his influence will be felt clearly by the company. Perhaps though, we will be freer in term of design after he has gone. Please don?t write that! [In parody Miyamoto then said: ?Mr Miyamoto openly criticises President Yamauchi,? then laughs cheekily]

Question: Sony has recently announced its plans for ISP?s and online gaming. When will you announce yours?

Miyamoto: We are exploring all our options regarding connectivity and this issue is being explored along the same lines as the connectivity between the Game Boy Advance and the GameCube. Having a version of a game online doesn?t necessarily mean that it becomes wider or more interesting than it already is. I think there is a danger that network gaming can become an escape from reality for the game?s developer. They can become overrun with new ideas that are not immediately possible, so the game he is working on at present suffers.

Also, once you have released an online game, you cannot go on easily to the next project because you have to keep watching the way the game progresses. In other words, you have to do the maintenance.

For example, in Japan it seems as though role-playing games are selling very well, but in reality it's just Final Fantasy and Dragon Quest that is selling well in the market, so even if you create online games, you need to manage the subscription fees and it?s not that possible to say how many units of software you need to produce to begin with and how many companies can profit from it.

Also, as I have said before, it is important that Nintendo can?t guarantee 100% what the networking environment will be. We guess that by 2005, only 20% of European homes will have access to broadband, and Nintendo cannot afford to program for only 20% of households, when we have the opportunity to sell to 100% of them. Though we could make an online Pikmin game. We are ready to go into the online networks, though we do not believe that all future gaming will be played online.

Question: How do you take the reaction to the cartoon Zelda and do you believe that what you have to offer is relevant to what the majority of gamers want regarding realistic games?

Miyamoto: We are exploring certain types of realism for our gaming but I believe that games should be judged on playing them, not on their appearances. It is for this reason that I have not brought the latest video of the Legend of Zelda with me today. It will be playable at the E3 show this year. Realism in graphics is not the same as realism in gameplay. It is the realism in gameplay that is of the most importance.

Question: Have you made any progress with SquareSoft, as far as them creating or a releasing a game for a Nintendo platform?

Miyamoto: There is nothing significant enough to be announced right now, but we have been in a number of talks relating to that.

Question: The disclaimer for third-party Game Boy Advance development contains a detailed section relating to infra red communication. Will this be a feature on future models?

Question: Sometimes, European gamers get the impression that we are less important to Nintendo that American and Japanese gamers. Can you reassure us that Nintendo loves us?

Miyamoto: I'm very sorry, and that's why I'm actually here today. I have visited Germany, Spain Italy, France and now England, in order to talk to European people directly along with Mr. Iwata. However, just a few days ago, his father-in-law unfortunately passed away so he had to return home. He was very sorry, and left a message saying he really wanted to be in the UK today. I really want people around the world to enjoy Nintendo games equally, and in order to do so we are now setting up a system whereby each software developer is having a dialogue with different people in charge of localisation. In order to have an efficient localisation process, we have already set up such a facility in Europe where people working on localisation are getting together to produce quality products.

Question: How critical is the fact that GameCube doesn?t use DVD media and will that restrict the size of games in the future?

Miyamoto: We have come up with the best hardware ever with the Nintendo GameCube system. I don?t know about Europe, but in Japan, DVD players are now very cheap. There is no need to combine the games machine with the DVD player as that can lead to other problems. These kind of hardware devices are destined to be broken and will need repairing: even if your games system is OK, if your DVD system playback is out of order you'll have to get it repaired which can cost a lot of money. And look at the small, compact size of the Nintendo GameCube. We wanted to make something for all ages, so even small children can handle it easily, and small hands can carry this disc easily. Also, when it comes to the accessing time for the media, this is quite good in comparison: for example, in order to access a bigger disc, you need more power. Then there is the problem of the disc scratching when it is released on a DVD sliding tray.

Another important point is with copy protection, which I think is one of the biggest issues in Europe. From a game-making point of view, game creators are now going to receive money that they are credited for. The optical disc offers strong protection against copyright infringement.

As far as the data size of the discs, for example, Resident Evil will require two discs, but for the majority of the games, one disc is enough. A problem is that people seem to demand realistic graphics from software: I'm not convinced that by relying on this, the game can be any good. I'm not sure if it's the whole world demanding realistic graphics or just a limited number of games players, but some developers are in the mindset that they feel threatened by the world into making realistic looking games right now. Therefore, they just cannot afford the time to make unique software because they feel the pressure to make realistic games and are obsessed with graphics. In the end, they cannot recoup their investment in the game. So in a way, the smaller disc is a message from Nintendo that you don't need to fill out the capacity of a normal sized DVD disc. If we want to make larger software, then we just make the game on two or three discs.

We would like to thank Mr Miyamoto and all at Nintendo for the opportunity to interview the Elvis of our industry and for him taking the time to sign all our trinkets and draw us some pictures.