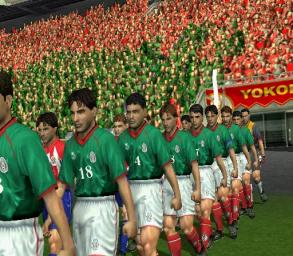 All Images (4) »
In one of the most predictable moves in video game history, EA has announced 2002 FIFA World Cup is in development for all major platforms.

As ever, the American video game giant is claiming 2002 FIFA World Cup will be the greatest football game they?ve produced so far. EA has retained the exclusive rights to the FIFA license and will feature motion-captured players with physical likenesses.

?We?ve gone to great lengths to set out to develop the most realistic, enjoyable FIFA World Cup experience,? said Executive Producer Marc Aubanel. ?In order to do so we?ve signed an unprecedented number of licenses in so we can deliver soccer fans their favourite players and teams in FIFA World Cup uniforms, competing in sanctioned World Cup Stadiums, replicated with lifelike detail.?

2002 FIFA World Cup will be released this summer for PlayStation, PlayStation 2, PC, Xbox and GameCube.

More details as we get them.
Companies: Electronic Arts
Games: 2002 FIFA World Cup